The Constitution of Georgia of February 21, 1921 consists of 17 chapters and 149 articles:

Chapter VII. Finances of the State

Chapter VIII. Control of the State

Chapter XV. Officials of the State

Chapter XVII. Revision of the Constitution

The Constitution of Georgia of February 21, 1921 is based on fundamental principles of Western constitutionalism:

The recognition of basic human rights is especially noteworthy in the 1921 Constitution of Georgia. The Constitution provided all fundamental rights set out in the European constitutions for that period and formed the constitutional basis for their protection. For example:

In terms of defining human rights, it should be noted that the Constitution of Georgia dedicated a special chapter 13 to socio-economic rights. Such a definition was probably related to the fact that the Social Democrats were in power in Georgia, and it was also an expression of their political ideology. It is difficult to say how the Georgian government would have been able to fulfill the obligations set out in this chapter of the Constitution, although at the declarative level it was an important statement. The main part of socio-economic rights was presented in the Constitution as follows:

One of the important principles of the 1921 Constitution of Georgia was secularism. The Constitution declared Georgia a secular state. Chapter 16 of the Constitution, entitled “The State and the Church”, stated that The State and the church are separate and independent from each other (Article 142), No confession or creed enjoys special privileges (Article 143), It is forbidden to make any levies from the budget of the state or local self-government bodies for the needs of any religious order (Article 144).

One of the important values of the 1921 Constitution of Georgia should be the establishment of a proportional electoral system for the Parliament of Georgia. Establishing a fully proportional electoral system is still a matter of serious controversy in Georgia, where a mixed electoral system has been in place since the adoption of the new constitution in 1995. Article 46 of the Constitution of 1921 established that the representative body of the Georgian Republic is the Parliament of Georgia, composed of deputies elected by universal, equal, direct, secret and proportional suffrage. Every citizen, regardless of sex, enjoying all rights and being over 20 years shall have the right to take part in the elections. The Parliament shall be elected for three years.”

It should be especially noted that every citizen, regardless of sex, enjoying all rights and being over 20 years shall have the right to take part in the elections. Although the Georgian parliamentary elections could not be held due to the Soviet occupation, 5 women were still elected to the Constituent Assembly of Georgia (Ana Sologashvili, Eleonora Ter-Parsegov-Makhviladze, Minadora Orjonikidze-Toroshelidze, Kristine Sharashidze, Elisabeth, Liza Nakashidze-Bolkvadze). This was a very important step forward for Georgian democracy, given that women’s suffrage was introduced much later in many democracies. Including, for example, the United States in 1920 and the United Kingdom in 1928. 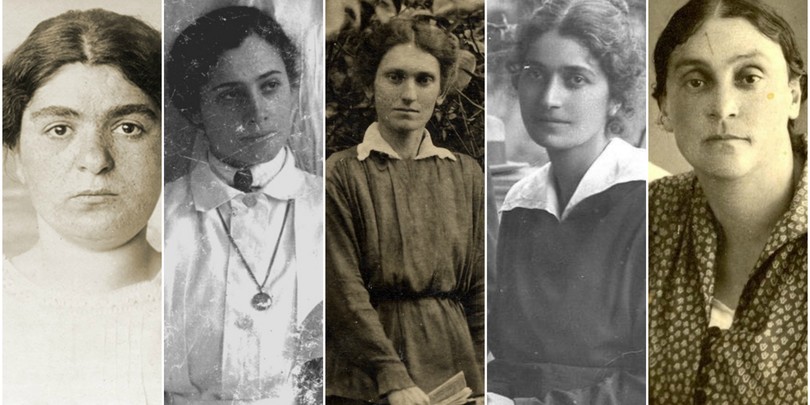 The powers of the Parliament shall be the following:

b) Supreme administration of the army of the Georgian Republic and in general of all the armed forces;

d) Ratification of treaties of peace, commerce, or other treaties with foreign states;

f) Approval of the budget;

g) The right to accept internal or external loans.

h) Appointment of officials as provided by the Constitution. i) General control of the Executive Power.

According the constitution, the Executive power belongs to the Government of the Republic. The Chairman of the Government is elected by the Parliament for the period of one year. The same person can only be elected consecutively twice. The other members of the government – ministers, shall be invited by the Chairman from among the citizens who have the right to take part in parliamentary elections. Members of the Government may not hold any other position or conduct a profession. They may only be members of Parliament or of the Councils of local self-government bodies. 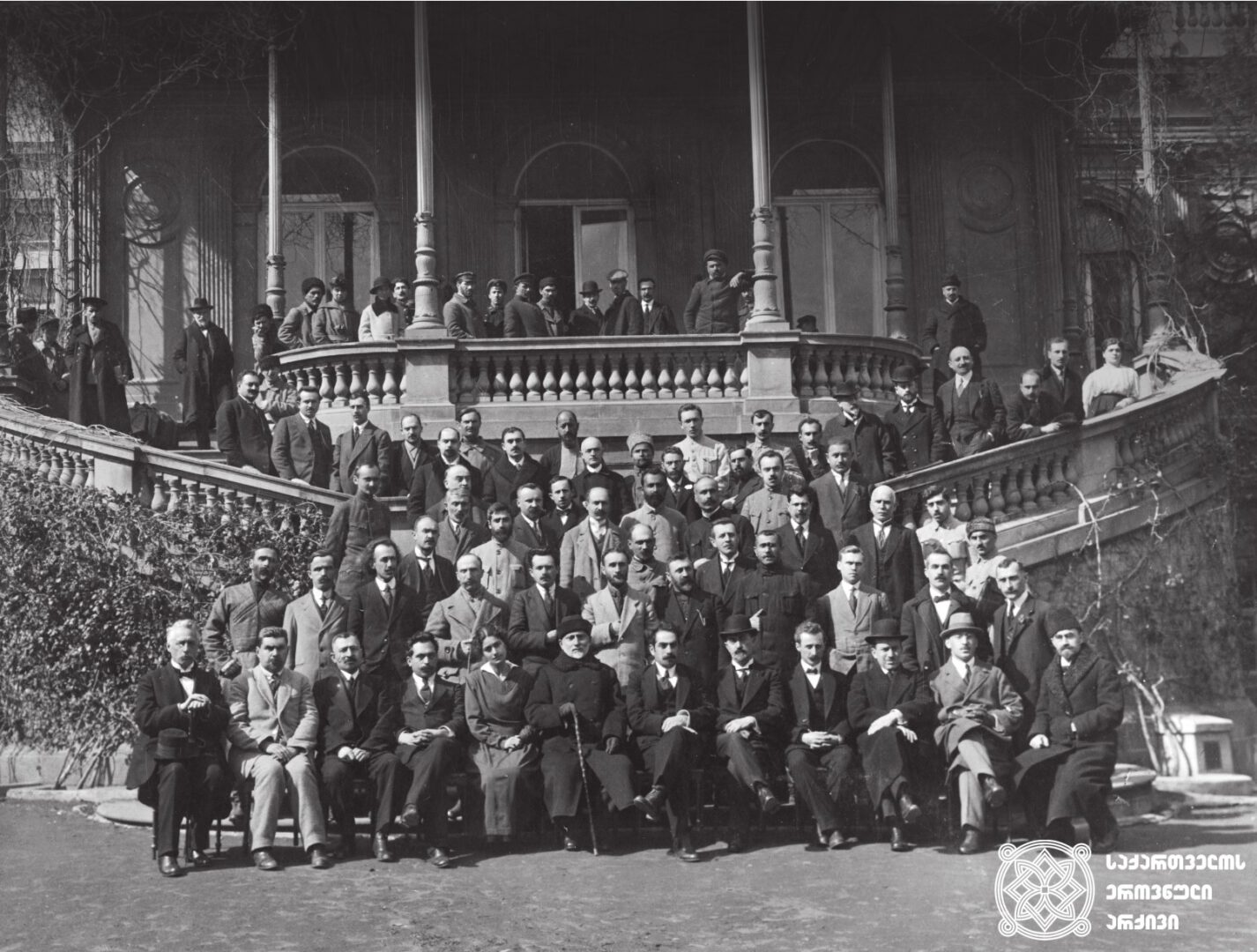 The constitution defined the judiciary. According to the Constitution, there is one Supreme Court in the whole territory of the Republic of Georgia – the Senate, which is elected by the Parliament. The Highest Court of Georgia shall have the following obligations: a) To monitor over the strict enforcement of the law. b) To ascertain justice in the capacity of a court of cassation (Article 76). The Constitution established main principles of justice:

Unfortunately, on February 15, 1921, the 11th Army of Soviet Russia invaded in Georgia, occupied the country on February 25 and Government was forced to emigrate to France. Before emigrating, the Georgian government first printed the Georgian Constitution of February 21, 1921, at Khvingia’s private printing house in Batumi. 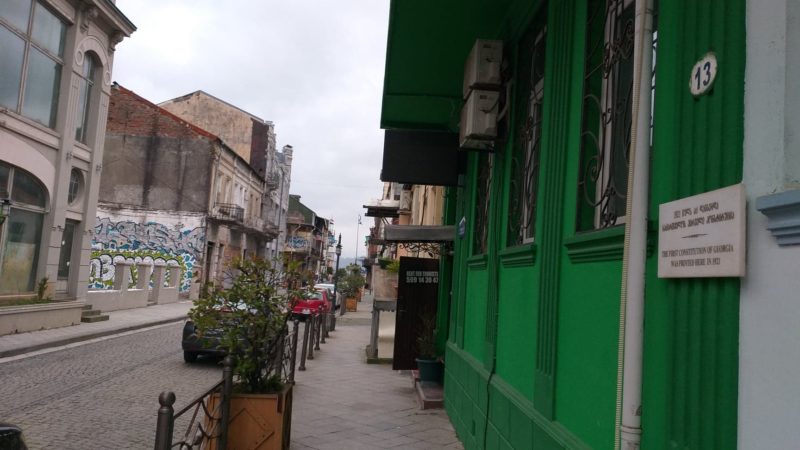 13 Kostava st., Batumi, where the Khvingia printing house was located in 1921 and the Constitution was first printed.

[2] Constitution of Georgia, adopted by the Constituent Assembly, February 21, 1921

[3] Beka Kantaria, Principles of Western Constitutionalism and the Legal Nature of the Form of Government in the First Georgian Constitution, Tbilisi, 2012, p. 16-18